We want to teach the world this important truth.

What does it mean that over 7000 cases of illnesses show that "a tooth is an organ"?
Also, what can we do right now to reduce the cost of medical expenses?

About one third of the Japan national budget is used for medical expenses. This amounts to around 3 trillion yen.
Medical science is developing rapidly, but the number of  people suffering from incurable diseases , or diseases of unknown origin are actually increasing. In an attempt to resolve this situation, Dr. Muratsu has worked for over 20 years with his belief that "a tooth is an organ". While stacking up more than 7000 clinical trials, he has brought about a major shift in medical thinking. A Malaysian student in Japan heard his story. 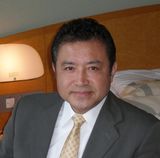 Profile: Dr. Kazumasa Muratsu
Doctor of Medical Dentistry. After graduating from dentistry at Kyushu University, and completing the university's doctorate programme, he studied Life Sciences at the University of Texas, USA. On returning to Japan, he started and practiced in Japan's first outpatient clinic of oral medicine at Kyushu University’s health center.
By looking at dentistry from the viewpoint of internal medicine, he used the idea: "the tooth is a key organ; brushing, the key to life", to develop and verify his "tooth-as-an-organ" theory.
This original approach to improving modern medicine, taking over 20 years, and stacking up over 7000 clinical trials, is bringing about a revolution in not only dentistry, but also general medicine. Dr. Muratsu was also acclaimed for this work through his involvement in the television program "The lesson I most want to take in the world." (Sekai de ichiban uketai jyugyo)

When did you become convinced that teeth were organs?

Teeth have a history of being "something you can do without", and in some places, dental decay is still known as a "lifestyle disease". While studying preventative dentistry as a graduate and undergraduate, I kept thinking that "keeping one's teeth" was somewhat related to the health.
When checking the teeth of the cheery older men and women at my clinic in Kyushu, I discovered that those who had kept their teeth were the healthy ones. Also, as I continued examinations, I established that a patient's blood pressure was strongly related to the state of their teeth. As I corrected patients' bite shapes, and removed incompatible materials in thier mouths. I found that problems with no visible causes, such as back pain, headaches, rheumatism, high blood pressure, allergies and psychological illnesses were quickly cleared or their condition improved. I gained confidence as I saw this again and again happening in front of my eyes.
If the tooth were not an organ, by just returning the tooth to its normal state, you wouldn't expect improvements to such diseases of unknown origin.
Over 20 years, through over 7000 treatments, I've seen many patients suffering with illnesses of an unknown origin, who heard rumours of me and came from all over Japan for treatment at my Fukuoka clinic. At my clinic, before I look at a patient's teeth, I measure the length of both of their legs.  Usually the length of people's left and right legs are different. However, surprisingly, when a patient has had their bite alignment fixed through treatment, the length of their legs becomes the same. When their bite is aligned, some people's eyesight returns to full strength, and their condition improved. Terrible headaches and back pain that patients have tried unsuccessfully to cure through other methods are improved just by realigning the patient's bite. You can't mistake the fact that the balance of the teeth is related to the whole of the rest of the body.

You led a gathering of 10, 000 people to eradicate tooth decay. Please tell us a little about that time.

On the 4th of June 2003, (the date in Japanese is "mu-shi", a pun on "tooth decay"), I sent an advertisement to three newspapers, the Yomiuri Shinbun, the Asahi Shinbun and the Ryukyuu Shinbun ( total number of circulation ,18.7 million copy), stating the opinion that tooth decay was an infectious disease. Since the publication of W.D.Miller's theory on the chemical bacteriology of tooth decay, we've had a century's worth of research findings, and today, it's said that no-one doubts that it is indeed an infectious disease. However, before the advertisment was published, for decades, we have had dental examinations in primary, junior high, and high schools, using inadequate disinfectant techniques, and reusing the same tools. In other words, one student's tooth decay, can be carried on tools, and infect many other students. Because of this, throughout Japan, and possibly, around the world, tooth decay has spread rampantly. With the "End of tooth decay" rally, with around 2300 gathering in Fukuoka, and a live Internet audience, we had an army of around 10000 people. We held a play and a musical on the theme of "Teeth are organs. Let's become a world where this is obvious" (ha wa zouki, ha ga aru no ga atarimae no sekai ni nare). For tooth decay, if we treat it in the same way as cholera and the black plague of old, the whole world working together, we can eradicate it forever.

If we do that, we can remove a large portion of medical expenses from the budget, and before long the large number of diseases of unknown origin will also reduce.

《Performance of an original musical:

"The Dream of Teeth" (Teeth no Yume)》 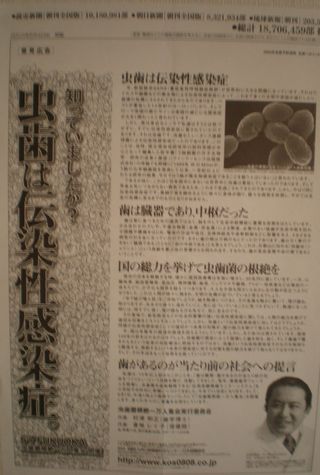 《The advertisement that is said

to have been seen by about half the population》

Even now, medical students are taught very little about the teeth.  Thinking about that, Dr. Muratsu's theory and the large number of clinical results is something we should be surprised about. While breaking new barriers with your belief, I think it must have been hard, but how did you overcome the challenges?

Getting to this point, it has been a very long road. I can't really convey it in just a one-hour interview but, thinking right now, something I couldn't see directly has been stirring within me since my student days. While a university student, I studied karate. That training was deeply difficult. Also to test myself, I went camping in midwinter. When I was out there, I started to freeze to death, and from that near-death experience, I began to feel in my heart the importance of life and the joy of living.

I worked for the university, and the way to become professor was prepared to me. However, beyond just living, all people have an appointed mission, a destiny, if you will. While thinking seriously about what I should do when I was working for Japan's first oral clinic at the Kyushu University Health Center ,I finally realized the truth that "the tooth is an organ", teach this to the world.

However, as this has been upsetting medical "common sense", I've been very discreetly continuing my own research. This has been a quite unbelievable trip. However, with many supporters and clinic staff, and more than anything, the encouraging voices of those patients who have come to our clinic at their wit's end with diseases of unknown origin, we've done nothing but research and stack up clinical cases. Through over 7000 cases seen, and treating a huge number of people, the truth of "the tooth is an organ" has become an undisputable fact. I really hope from now on a huge number of people, all over the world, can live healthily and work to complete their destined purpose.

Would you give us a message to study-abroad students, and young people living in Japan? Also, is there anything we can do to help your work in the future?

『To me, "work ( shi-goto in japanese )" can be divided into three kinds. "Private(shi) work", "Death(shi) work", and "Willed(shi) work". Work just for the benefit of yourself is "Private work". Work that deceives people is "Death work", and finally, "Willed work" is where you have awakened to the work destined for you, and you work with sincerity, tirelessly, towards that. While you're young, you will not understand what that destined work is, but for the sake of the world, and its people, if you strive eagerly towards finding that, you will be guided closer to your destiny. You should improve and prepare yourself for that time of discovery.』

『Also, in Japan and elsewhere, steep rises in medical costs are an obstruction to people's healthy lives. The amount of total medical costs is about the same as Japanese goverment's tax revenue. You can't say that's a normal state of affairs. Also people suffering from diseases of unknown causes are rapidly increasing. To all of you, shouldering the burden of the world's future, I'd like you to get to grips with this "teeth are organs" truth, and let at least one person more know that at the centre of the workings of the body are the teeth, and work to create this important culture together. Also, I'd like you to take the correct brushing method close to heart too, and let's help all those people in the world suffering from diseases with no clear cause.』

If each one of us brushes our teeth correctly, and respects the teeth as organs, we can prevent many medical problems. Knowing that "The teeth are more important than jewels", we can live full healthy lives, and tell those important to us about this essential truth.

An exciting new way to brush your teeth

1:  Don't use toothpaste, but brush your teeth with your own saliva.
In tooth surfactant and polishing agents, there are materials that are bad for teeth, but in saliva, there are enzymes, and antibacterial agents that help digestion, slow aging and promote health.

TEETH ARE OUR ORGANS 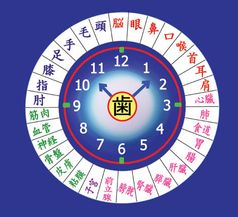 As the picture on the above shows, teeth are central to the workings of the human body. Teeth are like numbers on the face of a clock, with each tooth related to a different area of the body. When there's a problem with the teeth, this is reflected in an abnormality arising in the body. This, of course, turns the standard medial paradigm on its head. But this is the truth of the body; the truth of the teeth. Succinctly: "The source of everything is from within yourself".