A life committed to the sea

The pro-diver who went from ocean “terrorist” to “savior” 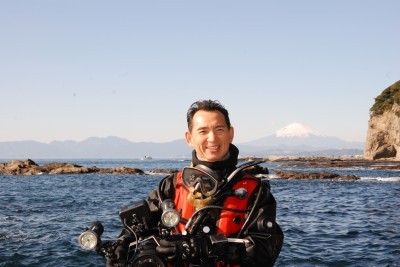 Profile of Masanobu Shibuya
"If Shibuya can't do it, give up": this is how Japan's leading pro-diver and underwater construction expert, Masanobu Shibuya, is often described. Having worked on projects like the Honshi Bridge, Haneda Airport and the Tokyo Bay Aqua-Line, Shibuya-san currently devotes his energies to ocean regeneration based on his extensive research, enjoying attention both at home and abroad.

Q: Please describe the path towards your current work protecting the ocean.

I began work as a pro-diver at 25. In the beginning, I lived by a creed of “longer than anyone, deeper than anyone”, and I took great pride in my diving ability and physical strength. At 32, I founded my own company. However, during our first big underwater construction project I fell victim to decompression sickness. During my three-month hospitalization following, I felt for the first time the weakness of the human body.
Other life lessons awaited me however. As company president, I failed to consider the feelings of my employees; I demanded too much of them, and one day they all quit at once and left the company.
I became very depressed after this, so I began to read books on spirituality and practice activities like yoga. As a result, I learnt the importance of considering the feelings of those around me. Through daily contact with nature and my wife, I began to sense things like the inner strength of tranquility and the strength of women. I became very grateful to my wife for her quiet but unwavering support, and rediscovered the beauty of the ocean that I came so close to forgetting; I realized that through my work I had been destroying this beauty. Looking back on past construction projects, my sense of remorse grew daily, and I began to consider quitting my career.


From destroyer to protector: the construction project that led to an awakening

It was in this state of disillusionment when construction of the Tokyo Bay Aqua-Line began. The first job was to fix the ventilating device, known as “Kaze no Tou” (or the “Wind Tower”), into the water. Later, upon surveying this structure, I discovered sea bream were settling there. At that moment, I began to recall past construction projects I had worked on one after the other, and how fish would return to the area after they were completed. I had a realization - “Not all underwater construction is bad. If done correctly, you should be able to create an environment suitable for marine life to live in.”

From that moment on, I decided to dedicate my life to “development compatible with the environment”, and “education of the spirit through diving”. Originally not a specialist, I began to study by myself from scratch about marine life and plants. I returned to past project sites, and began to research the post-construction environment while taking photo and video records.
This style of environmentally-friendly underwater construction I was advocating began gradually to garner attention. I started to be featured on TV and other media, and the underwater world that I had been observing finally began to be shown to the outside world. After many years of quiet dedication to my work, it was truly a happy moment for me.
At present, the ocean around Japan is in a critical situation; the seaweed that fish and other marine life rely on for nourishment is declining rapidly. I want as many people as possible to know about this. If we care for it properly, it is more than possible to regenerate this ocean environment.


Q: Please give a message to the exchange students and other young people out there.

In the beginning, I was an “ocean terrorist”. Now though, I dedicate all my energy to protecting the ocean. At the moment you may be destroying the environment. However, it is never too late.
I think that in all people there is a wonderful and pure spirit. The strength to overcome adversity even when things are going bad, the ability to be kind to people; I think everyone possesses that kind of spirit. From now into the future, you will make many mistakes and face many difficulties. I want people however to occasionally get in touch with nature, be kind to others, and lead positive lives.

To be able to speak with a pro-diver who is respected not just in Japan, but also worldwide, was a valuable and unique experience. As a young person, meeting with someone who has had a wide variety of experiences was informative and made me think of my own future. Not only that, but when I heard about Shibuya-san’s activities in environment regeneration and his life story up until then, I realized that he was not just a leading pro-diver, but also a leading contributor to society, and my respect for him deepened. In our present world which is facing various environmental problems, I think people like Shibuya-san are saviors.

A life committed to the sea  The pro-diver who went from ocean “terrorist” to “savior”
https://www.yokosojapan.net/article.php/feature_海０１_en