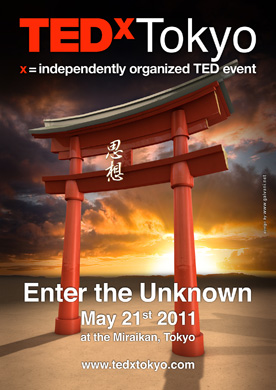 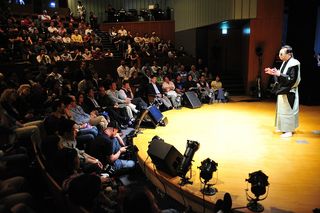 Since 1984 the world’s leading thinkers and doers have been gathering once a year for an event they variously describe as “the ultimate brain spa,” “Davos for optimists,” and “a four-day journey into the future, in the company of those creating it.”
What are they talking about? TED — a conference like no other. TED stands for technology, entertainment and design — three broad disciplines that are collectively shaping our future.

On Saturday May 21st from 9am the third annual event, Enter the Unknown, held、which is set to be bigger and better than ever as we bring together an even wider range of speakers and participants to share ideas and inspiration. In the wake of the devastating March 11th earthquake and subsequent tsunami & radiation menace, we abruptly altered our focus to explore practical and inventive ways of rebuilding and renewing Japan, and uplifting the spirits of its people.Over 30 speakers and 300 participants will be joining us at Tokyo’s iconic Miraikan, with thousands more around the world watching on the day via our bilingual live streams, whilst taking part through our social media channels. 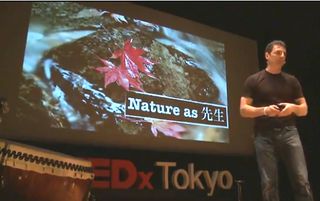 His approach, which embraces the Zen tenets of restraint, simplicity and naturalness, is clearly making an impact: Garr was at one time the manager of Worldwide User Group Relations at Apple Inc. in Silicon Valley, and is currently an associate professor of management at Kansai Gaidai University in Osaka. He lives in the quiet countryside of Nara amidst the ubiquitous bamboo trees. 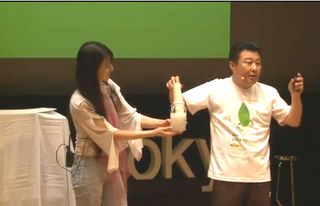 Plastic doesn’t seem so fantastic these days—more an ecological nightmare that is overflowing our garbage dumps, accumulating in vast, drifting islands, killing wildlife and disrupting the food chain. But Akinori Ito, the CEO of Blest Corporation, wants us to see waste plastic as a resource, especially here in oil-poor Japan. That’s because he has invented a machine that can transform a single kilo of plastic into about one liter of oil and refined into gasoline, diesel or kerosene usable in generators, stoves, cars, boats and motorbikes. Better yet, the Blest machines heat rather than burn the plastic, generating no poisonous pollutants. Akinori and Blest have created models for both industrial and home use, and have already sold over eighty to buyers in Japan and abroad, including the Marshall Islands, North America, India, Greece, Korea and Kuwait. Akinori’s dream is to make this plastic-to-oil conversion a global practice. 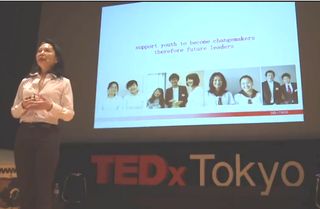 Nana Watanabe has a wide-angle lens on life. As a photographer, she has shot for iconic brands like Shiseido, Sony Music and Paris Vogue, and also exhibited extensively in Tokyo, New York, Paris, Shanghai and Berlin. In 2000, Nana began chronicling the lives of U.S. and European social entrepreneurs for Japanese audiences. Five years later, Keio University selected her book Changemakers: Social Entrepreneurs Are Changing the World as one of three texts for its “Social Innovation” graduate course̶ Japan’s first social entrepreneurship-related program.
Nana published a second book, “Changemakers II: Social Entrepreneurship as a Way of Life”, in 2007. She also advises a citizens group called Ashoka that supports social entrepreneurs and wants us all to become changemakers. As part of Ashoka-Japan’s Youth Venture Program, Nana’s team recently launched Youth Move Japan Forward to solicit ideas to improve post-crisis Japan from local youth and help them turn those ideas into constructive social enterprises. （quoted from TEDｘTOKYO website http://www.tedxtokyo.com/[*1]  ）