‘Sousei Water’ - This ‘miracle water’ renders detergents, shampoo and pesticides obsolete, and by simply mixing it with oil can also reduce fossil fuels and harm from emission gases! 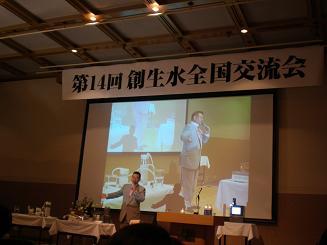 
It is said our bodies are made primarily of water. According to one study, 83% of our blood, 79% of our brain, and 83% of our muscles are water. In recent years, water pollution from chemical contamination has become a worldwide problem, yet a fundamental solution has still not been found. However, tackling this problem has been one Japanese man’s calling for over 20 years now. His invention, ‘Sousei Water’, has been garnering widespread attention from both governments and relevant organizations in countries like China, Korea, Taiwan, Canada and Germany. In particular, many requests regarding joint ventures and research cooperation in national environmental projects have come from China and Korea. Sousei Water’s founder, Mr. Fukai, vowed upon his late father’s words to continue his water research, and the results of this over many years have produced countless miracles. We asked him about his thoughts regarding Sousei Water.
Interviewer: Haung Donsu- a volunteer who helped out on-site at the Daehan oil spill in South Korea, where Sousei Water has been attracting attention. 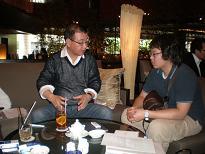 Q: Why the fixation on water that removes detergents?

”I used to run a hotel and restaurant. One day, I saw large amounts of detergent foam flowing down the nearby Chikuma River. There was no doubt it came from my restaurant and hotel. At that time, I remembered my late father’s words – ‘Nature and man are one entity. If we pollute our rivers, our blood will become contaminated, and we will certainly become sick. We must not pollute our rivers.’ I agonized over this for nearly three years, but my father’s words would not leave me, so I liquidated all my businesses, and my fight against detergents began.”

”At first, I began researching the toxicity of detergents. If you place fish in a tank, then pour detergents in, they will go into a terrific frenzy, and before long will die. Although detergents cause much suffering and agony to fish, the reality is we nonchalantly use such products. Seeing this, my resolve to get rid of detergents strengthened. ” 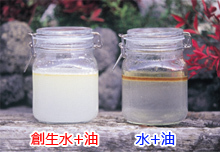 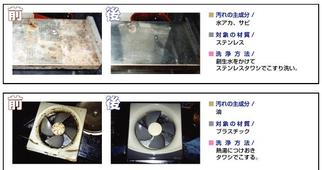 
Q:Using your own private funds, it took eight years to succeed in the development of Sousei Water. How were you able to continue your research day-to-day without giving up? Please describe the background to this.

”I think the education from my father was a big influence. Even now, I have a memory that I cannot forget: one day, my father pointed out a dismantled carburetor and said, ‘Return this to its original state.’ I replied, ‘There’s no way I can do that! Why don’t you ask a repair shop to do it?’
My father however said that anything made my humans should be able to be repaired by humans. I told him I had no idea where to begin fixing it, but because of my father’s forceful attitude I resolved to fix it myself . So, with tears in my eyes, I tried with all my might to re-assemble the carburetor. During that time, I was not allowed back in the house, and while it took three days and nights,
I finally learned that there was nothing I couldn’t do . While my father was very strict, he was greatly respected by people in our town. He always instructed me to ‘not irrigate my own fields, but irrigate others’ fields.’ It was this lesson that led me to create Sousei Water.”

Q:”having great desire to succeed , as a layman I had no idea what to make as detergent replacement. While receiving advice from various people and doing my own wide reading, the thing that caught my attention was water. This was because I had heard stories from my grandmother’s era about how long ago they were able to do their laundry in rivers without detergent. If that’s the case, I thought, shouldn’t I just return water to its original form?” 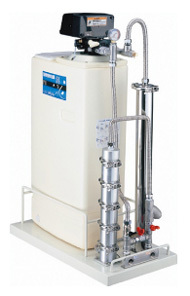 ”With my father’s words in my heart, I felt I had to return the rivers we had polluted to their original state, and continued to silently carry out countless experiments. I made many miraculous discoveries and gradually came closer to my goal. Then by chance I read a newspaper article about obsidian (volcanic glass), which was used in large quantities during the Jomon era, and my instincts told me this was it. At long last this became my replacement for detergents, a primordial water that was good for the body – Sousei Water was born.” 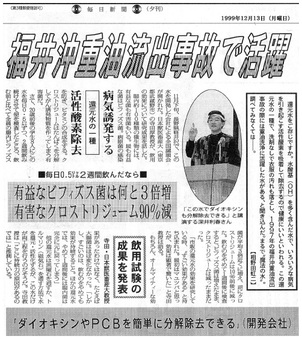 （Article of national newspaper about the sousei water）

”Sousei Water succeeded in drawing out the ‘original power of water’ – something that was until now thought impossible. It even holds the potential to remake industries – such as beauty, cleaning, food and drink, hot springs, agriculture, and medical services – into ones that are friendly to the natural environment. The chemical with the element number one is hydrogen, right? If you return water to its original form, you will definitely solve environmental problems. Humans, animals, plants, soil, the atmosphere - they all consist of the element water.”

Q: What would you like to see from exchange students and other foreigners in Japan, as well as other Japanese young people?

”There’s no such thing as borders when it comes to protecting the environment. I heard that you volunteered after the 2007 Daehan oil spill in Korea – we also brought over Sousei Water generators from Japan and did clean-up work on the oil-covered rocks by the coast there. Using Sousei Water you can easily separate water and oil from one another, so the work progress smoothly. Everyone was overjoyed and we were even featured in a KBS [Korean Broadcasting Station] broadcast. However, because the seas are connected, these sorts of problems aren’t just faced by Korea. In order to protect the earth I think there is a need for people around the world to engage in action that transcends borders.”

”Sousei Water attempts to return soil back to its original state. Through this, microorganisms are restored to life, and agriculture becomes possible without the use of pesticides. Even after terrible oil spills like the ones in Fukui and Daehan where the sea became black, by dispersing Sousei Water on the sea coast microorganisms burst back to life and by the next year seaweed and fish had returned. In other words, it is possible to regenerate polluted oceans through Sousei Water. Speaking of big oil spills, at the moment there is a lot of commotion over the Gulf of Mexico, and I myself am preparing to go there and help.”

”In Japan and Korea, whenever there are incidents involving large oil spills many young people have helped out as volunteers. If young people develop a consciousness that respects the global environment more, the earth will became a better place to live in not only for humans, but also animals and plants.”

”‘Itadakimasu’ and ‘Gochisousama’ [phrases said before and after meals respectively] are directed not only at the person who made the meals but also to the life of the food. Japan also has an ancient culture where one expresses gratitude towards nature. There’s even a hint in kanji [Chinese pictographs]. If you look at the kanji for ‘sea’, it means ‘water is the mother of people’. By polluting our water, I believe we are polluting the mother of life. The kanji for ‘pollute’ is written ‘to dirty water’. If we try and wash something by using a toxic substance, that’s an act of polluting. Also, the kanji for ‘wash’ is written ‘water is first’. This is teaching us that in order to ‘wash’, water is the most important thing. Considering this, I ask everybody to please understand the importance of water in their daily lives.” 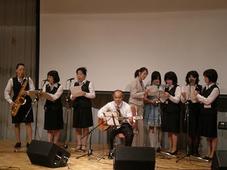 Haung Donsu (Korea) (Hanshin University, spring 2010 graduate) In 2007, he volunteered on site at the Daehan oil spill. He worked in extremely tough conditions where even cleaning one rock was difficult. One of his friends was hospitalized after the clean-up as a result of the fuel oil. Post-interview impressions: Meeting and talking directly with the head of Sousei World Fukai Toshiharu was truly enlightening. I realised that in the end, the most important thing in order for humans to continue living is the environment. In our current world where the environment is gradually deteriorating, it was somewhat relieving to know that people like Mr. Fukai are out there, protecting the environment through actions like volunteering at the Daehan oil spill. I think people should consider the environment more seriously.

The Inventer of sousei water

(with volunteer workers at the site of oil spill happened along the coast of fukui pref.)

Representative of environmental NGO Clean Water World Initiative (CWWI) and Sosei World Co Ltd. Developer of “Sosei Water” and “Sosei Cleaning Wet Pure” - technology whereby dioxin can be decomposed at ordinary temperatures and pressure without the use of detergents or solvents. Working by himself on these technologies, they can now be put into practical use. Also a representative of the Sosei Cleaning Research Institute (“Sosei Kuriiningu Sougou Kenkyuujyo”) ,which is conducting collaborative research with the Canadian Government’s Ministry of the Environment (Wet Cleaning Department).

related article: A lifestyle that doesn’t contaminate our water?