Believe and perform earnestly, there will be a new way ahead. 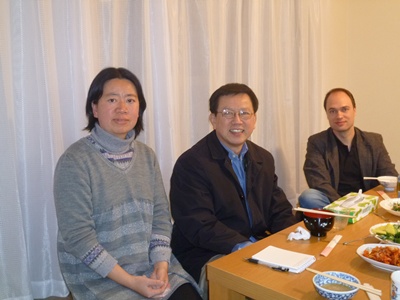 Without special experience, it is very difficult to be employed in Japan if one is over 40 years old, let alone for a foreign woman. Ms. Xia Su was a Chinese student at Waseda Graduate School who was fascinated with the “Soetanto Method” and was supporting professor Soetanto’s class as TA (Teachers Assistant). Hoping to find a job somehow in Japan, Ms. Su kept on sending about one hundred job applications. 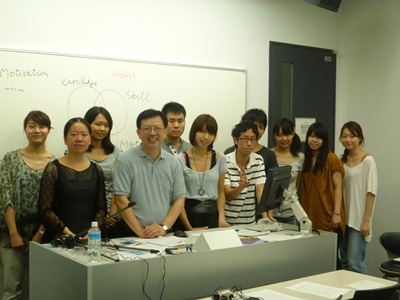 （Ms. Xia Su as a TA with students）

For reality, even progressing to an interview was difficult. Ms. Xia Su became anxious. But she deeply believes the fate can be changed if one thinks about people’s viewpoints; people will be touched if one performs "GIVE GIVE GIVE" earnestly. She continued the job-hunting activities, but not a single answer came. The effort bore fruit when she was called to the interview by a major logistics company.
Ms. Su had to give up job hunting in Japan if she could not get this job offer. She attended the interview being aware of what she could serve for the other party, which had being practiced as one of Soetanto Methods daily.
Then the miracle happened. Ms. Su’s effort of trying to be helpful to people was highly commented. As a foreigner, she was observed to "have a way of Japanese thoughtful thinking". Despite she applied for an ordinary position, Ms. Su was warmly welcomed as a senior management treatment. Thus she became the only female foreign senior management in the company. Her friends, family and she herself were very much surprised by this result.
Ms. Su had suffered from depression for many years. Until a few years ago she took medicine to somehow maintain calm. She disliked herself being such a person. Ms. Su attended professor Soetanto’s seminar by chance. Knowing what professor Soetanto had been putting effect in, she realized that egocentricity made her the dark person. It turned out that people were kept a distance from her.

“Maybe this is the last chance to change own character”. Ms. Su began to positively think how to contribute to the people around her and performed them one by one. She read the books about “Soetanto Method” written by professor Soetanto again and again as her "Bible". Her character became bright and everyday life delightful. She stopped the medicines which had been taken for 25 years. This is a rare case for those who suffered from mental illness such as depression like her could recover completely. Originally Ms. Su had talents in different fields. She began to write poetry in Chinese. She started China Study Group with other sponsors, also organized Business English Study Group. She changed dramatically and began to sincerely “serve the people". People around her became more and more fascinated by her zeal. By studying “Soetanto Method” eagerly, Ms. Su mastered “how to control the motivation”, and came to understand well the intention of other people.

It is hard to believe a person who suffered from depression till a few years ago could change like this….Believe in the "words" of the person who respects, and perform with all one's heart, it is possible to change the character at any age. Ms. Su's successful job hunting might be that to happen rather than a miracle.